Coming back from the VEX World Championships, it is hard to believe how far we have come in such a short time. Last year, we were just a rookie team, with next to no knowledge with how VEX worked. Now, in only our second year, we are VEX Excellence World Champions.

Day one started out as last year. Those of us who arrived early brought in our equipment, banners, buttons, and maple candies to set up the booth. We promptly split off into our designated groups of drive team and scouts to start maximizing the downtime that we were given for this one day before competition.

Day two begins, and the opening ceremonies commence. After, we head down to the pits to start scouting and preparing the robot for our first match, which began very shortly after the end of the opening ceremonies. We continued to scout matches for teams that we would be facing or going to the field as allies with, as well as looking for teams who would make worthwhile allies for the elimination rounds. Throughout the day, we won all our matches, and managed to get second place in programming skills.

Moving to day three, things started to get more intense. We encountered one of our two hardest matches of the entire competition, and after a fierce match of scoring and de-scoring, we waited for the match following to see if we managed to pull it off. Our first match was very close, but we came out victorious, but our second match, our allies robot experienced difficulties, and we were defeated, stopping our perfect run. Despite the loss, we were still determined to do the best that we could do, and ended the day just below the top eight in tenth place. We also presented for the Excellence award, and our presentation couldn’t have gone better. They loved what we were doing, and seemed very interested in what we had to say about our story getting to the worlds.

The final day of competition. Our last two matches before the elimination rounds. We were incredibly nervous, as losing one more match would drop us down far below the top sixteen teams. Despite this, we still persevered, and won both our last matches, and ended the qualifiers in the top eight.

Going into the eliminations we were confident in our alliance selection. We managed to make it all the way through to the semi-finals, where we were unfortunately eliminated by the first seeded team. Despite that, we were deemed the Divisional Excellence winners, therefore qualifying us for the World Champions Excellence Award! We also received notification after receiving the award that we had, for the second year in a row, won the Programming Skills World Champions Award, making us even more excited!

We headed into the VEX Dome to watch the Round Robin matches, and then the closing ceremonies. When it came time to announce the Excellence Award winners, we were all at the edges of our seats. The team they were describing sounded very much like us, but also much like a few other teams. Then, the announcement is made: Team 5225a is the winner of the VEX World Championships!

It has been an amazing season for our team. In this season alone, we have won 15 different awards from 5 different events, defended our title as Programming Skills champions, won first place in the Animation Challenge, and became the WORLD CHAMPIONS for VEX 2013. We look forward to seeing what challenges other teams will bring for the next season, VEX Toss Up, see you on the fields. 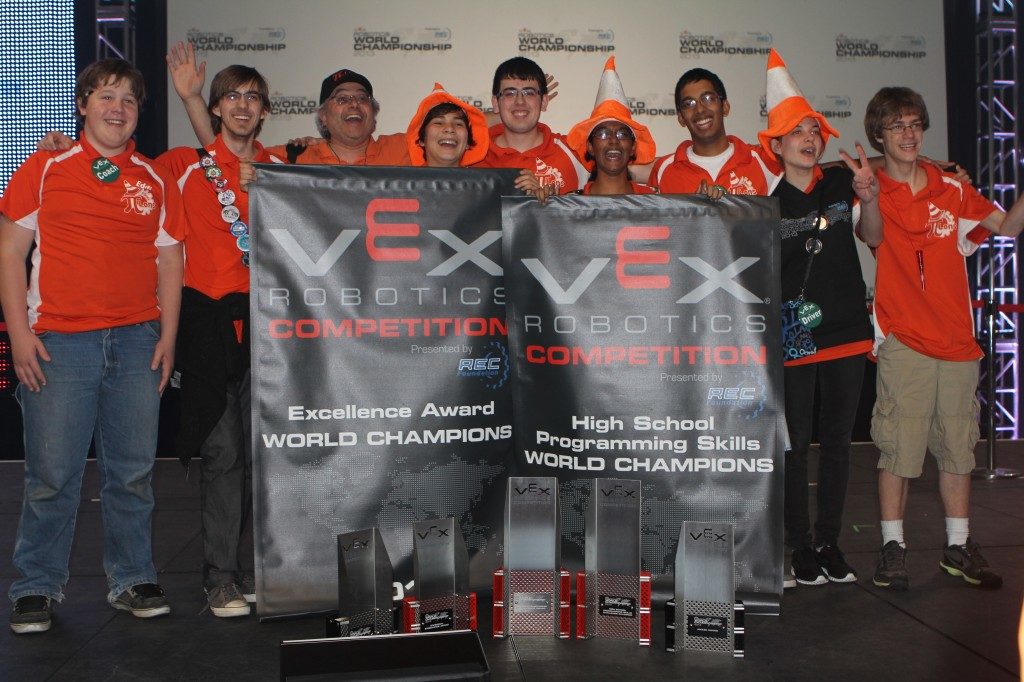